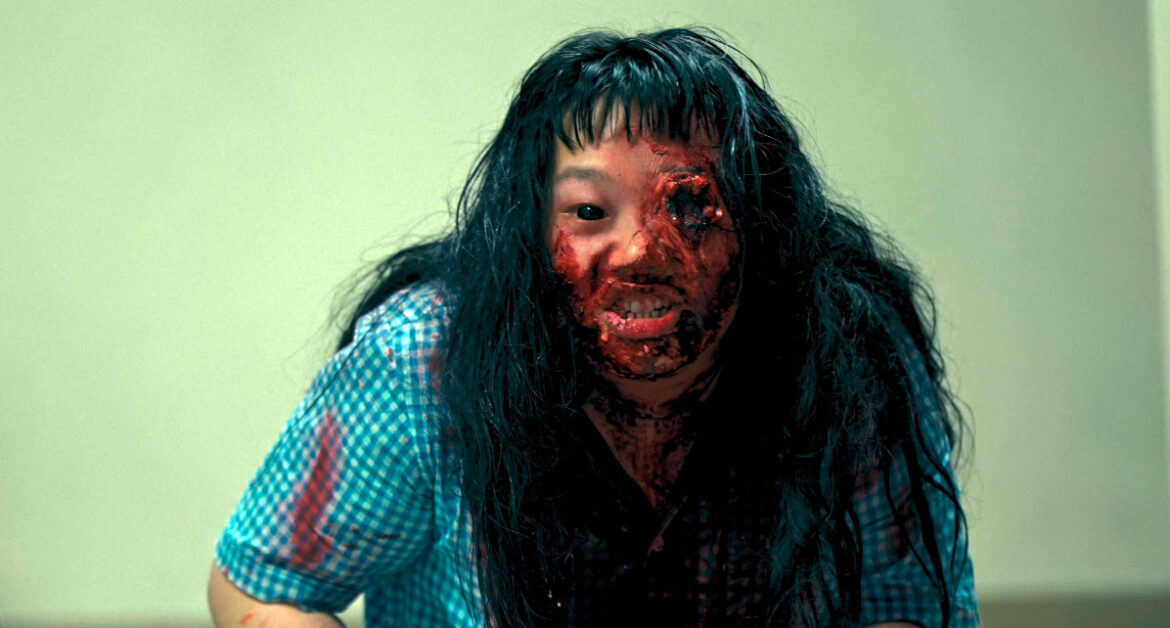 Reading the book before watching the film can be the best or worst thing. I am not saying that The Sadness is based on the Garth Ennis comic book Crossed, but it sure feels like it could be. This film can be too far-fetched and unnecessary for people unfamiliar with this ultra-violent, hypersexual, pandemic apocalyptic comic series. But it feels like a story ripped straight from the pages and aggressively thrown onto the big screen for people who did read the book before watching the film. And for those people, this film is a dream come true. For everyone else, get in where you fit in.

The Sadness centers on the country of Taiwan being overrun by people infected by a virus that turns them into cannibalistic creatures. The virus also causes them to act out their most basic and primal violent and sexual urges. The infected don’t just want to eat your brains. They want to unleash sadistic acts on you. The film doesn’t shy from depicting their egregious behavior. It shouldn’t because it separates it from any other movie in this genre. It is beautiful to know there are no holds barred in what the film wants to give its viewers.

The film follows the journey of two star-crossed lovers maneuvering their way through the ever-increasing new world infected by the Alvin. Along the way, we are introduced to a few supporting characters. None of them are spared from murder, dismemberment, or the extreme torture that awaits them. With the odds of survival stacked against them, the two love birds try their hardest to reunite and save each other.

The Sadness is a ride, unlike anything I have ever seen cinematically before. The infected are driven to act out on their dark self-gratification desire. It differs much from the typical “just going to eat you because that is what zombies do.” For me, this film ranks among the top 10 zombie films of all time. It did everything I could have dreamt of in a movie which is why it felt so inspired by Crossed — suspicions that were confirmed when I heard the comic series heavily inspired the director. It isn’t difficult to see the similarities, violence, mutilation, torture, and motivation-driven infected zombies. It has all the signs of Crossed film just without the infected face displaying the crossed shape markings.

I hope this film finds a way to connect with audiences that are not bothered by the one-inch barrier at the bottom of the screen and nobody looking like what the average film studio caters to with casting. This film finds its audience thanks to Shudder. Hopefully, it can connect with genre fans without having a horror staple of white actors on the screen. It’s an epic zombie installment and hands down the best horror film of the year to date. The raw nature of this film guarantees it to be in my top five horror films and a best of the year in my cinematic wrap-up. See this film. You can hate it or love it. But see it.

If you like this film, learn more about Crossed.

Watch The Sadness on Shudder, May 12.