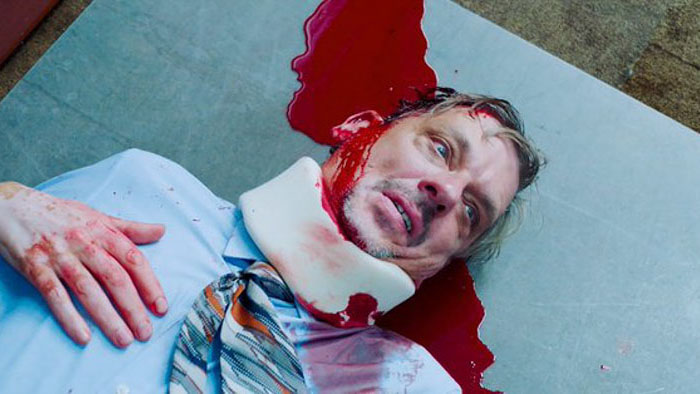 Veronique Jadin returns to the director’s chair to tackle one of the most persuasive, historically problematic social issues in this disturbing yet hilarious film. Her film “Employee of the Month.” speaks to the relationship we all have with misogyny. This film successfully shows its insidious effects of misogyny through the interactions the lead characters, Inez (Jasmina Douieb) and Melody (Laetitia Mampaka), have with everyone they come across in this film.

It is fair to compare it to Alex Garland’s recently released film Men. Which unsuccessfully attempted to speak to the same harmful issues in society. However, the execution of displaying misogyny in “Employee of the Month” was near perfect. It borrows from Colin Higgins’ 1980 classic “9 to 5,” where three women take the battle of the sexes personally and attempt to take out the sexist boss. This film doesn’t try to take him out. He is taken out.

The plot of the film centers around Inez, a devoted employee. She’s been with the company for 17 years and desires recognization for being a valuable employee. And receive the same fair compensation as her male peers appear to get easily and often. Inez is performing many important tasks that lead the company to success. However, her value to her male colleagues revolves around Inez making coffee, getting them coffee, and replenishing the toilet paper in the restroom.

To the men, she is disposable and not even worth considering as a person. Her sex is the defining characteristic of how they base their interactions with her, which are all hyper-negative. It is tough to watch at times as Inez is without any allies in this fight. Jasmina shined throughout this film. Her performance defines this film. Whether or not Jasmine was in the scene was directly related to Inez and the situation she found herself in. I look forward to her next project. This film shows that she has the talent to carry a movie if asked.

Enter Melody. She is in school and is looking forward to her future. Her mother, who worked for the company as a cleaner, got Melody an internship, a requirement for her graduation. Melody is the viewer for the first act of the film. She observes all the indignations Inez deals with. She shakes her head in disapproval of the men’s actions and bristles at suggestions to appease their sexist notions. She doesn’t want to be there. It is uncomfortable, yet we are watching everything with Melody as it unfolds. The portrayal of Melody by Laetitia Mampaka is so central to the film’s success as she is the viewer’s eyes and ears in the beginning and transforms herself into a capable co-star in this film. She is allowed so much range as an actor to explore. Seeing her spectacularly perform this role that she did was great.

It takes a while, but the film starts to embark on its darkest moment. When you think it couldn’t get any worse, the film flips to what can be best described as a series of follies that end up with lots of bloodshed and death. It is a wild ride that the director Veronique Jadin takes the viewers on. Nobody is spared. Not eve Inez and Melody from the carnage that takes place. There are moments in the film where you can see how the misogyny impacts not only the men but also the women. In a humorously dark film, Veronique put together a biting satire of men and women’s relationship and its impact on all of us. The film’s take on misogyny may seem overblown. However, to those that experience it. It doesn’t seem exaggerated, which is why this film will speak to many viewers.