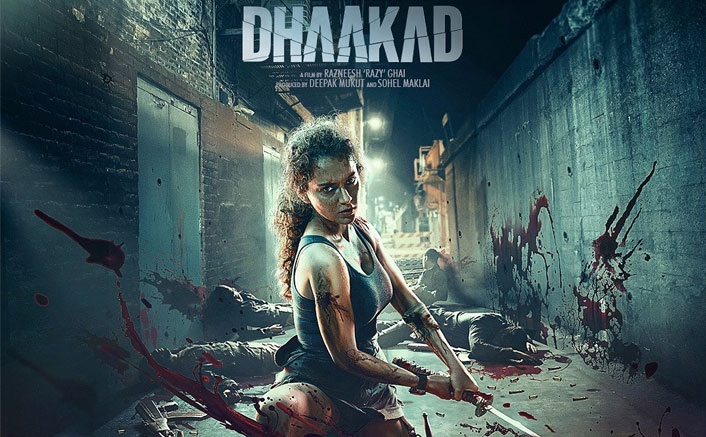 Today I had the opportunity to see an exciting movie. I got to watch Dhaakad on the big screen in America. Now for, people are used to seeing big-budget films with a significant representation of people of color, as Indian cinema fans have. Dhaakad was an incredibly rare treat for me. So I can only speak of the film from this perspective. I was stoked by not having to see a standard plug and play Hollywood actor in a big-budget action film. Instead, I experienced Dhaakad without knowing who the director or actors in the movie were. I enjoyed the movie in a manner that’s foreign to me with these types of movies.

The film opens with a bang. The violent introduction to the main character Agni is fun. She is played by Kangana Ranaut, who lits up the screen with her presence. Her character Agni is a ferocious predator for the government and is very good at dispatching foes. She works her way through the enemy throughout the film. Sometimes she is successful, and Agni is punished severely for defeat. Overall she is relentless in the pursuit of her goals. The murder of her parents torments Agni, and she seeks revenge for their deaths. She violently marches forward until she meets her true foe, and the day of reckoning arrives for everyone involved. Her revenge is paramount to everything taking place in her life. It is her compass. She never loses sight of it. It is the glue that keeps the film focused.

The hero of the film is Agni. She proves her worth by her ever-growing body count and her display of secret agent talents a viewer of this genre can appreciate.

The Villians of the film are a Bonnie & Clyde type duo. Rudraveer (Arjun Rampal)and Rohini (Divya Dutta)are thick as thieves and compliment each other as their chance encounter sets the two own them of a life of crime together. They are ruthless. Murder, forced prostitution, and torture are all methods of amassing power. Rudraveer is more idealistic in his pursuit. He believes it is his birthright to have the control he wields. His energy, combined with the narrative he shaped in his mind, makes him incredibly deadly. Whereas Rohini is celebrating her current stature in the sexual slavery pyramid. Her indifference to others is rooted in her experiences of being just like the woman she forces into sexual slavery. Instead of being in bed, she is the supplier. It is a stark difference between the two villains. But yet, it doesn’t matter if you are in their crosshairs.

I feel that this film works as most action films do. It isn’t to move the world. It is there to eat popcorn and have you enjoy the visuals on the big screen. Having a story with an arc that is completed with no ambiguity is a plus. I give it a high rating because I got what I wanted from the film, which is all I ever want in a movie. I am happy. I hope to purchase it one day.