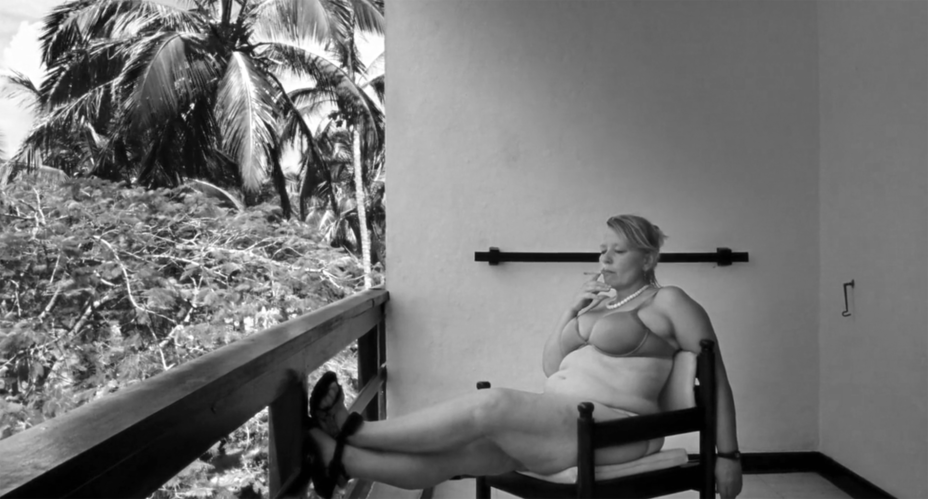 It isn’t often that I am disturbed by a film. One reason is probably because I avoid those films. However, sometimes one may slip through. Paradise Love was one of those films. That being said, I found it compelling enough that I wanted to see the other two films that complete this trilogy. Those films are Paradise Faith and Paradise Hope. All of the films are directed by Ulrich Seidl. This film is co-written by Goodnight Mommy and The Field of Evil fame Veronika Franz.

The story revolves around the exploits of a 50 plus-year-old white woman named Teresa from Austria on vacation in Kenya. I have to tell you. She comes off so nice. I mean she has the normal I work hard and not completely happy thing going on. But fuck it. So many people have that. It seems clear after the first few minutes she needs a vacation.

She lands there and I’m struck by the tourism industry that is built on accommodating the white tourist. It was extremely cringe-worthy to me. From the bus ride to the entering of the resort. It just was off-putting. The placating was something I would not want personally experience. Yet, it was there. The resort as expected was filled by white vacations and African workers.

The fetishizing of sexual relations are made clear early in the film during a conversation with Teresa and her friend played by Inge Maux. Who I thought was amazing in the film. Her character never minced words and her pursuit was clear. Her understanding of the nature of the relationship was always transactional. That aspect is what Teresa had difficulty in understanding. She spoke as though she wanted an emotional connection. However, she wanted what she wanted. It was like any of these men would be taken away from Kenya and something more than the male prostitutes that they were.

The reality of the environment that these white Austrians vacationed was made clear as Teresa first wandered off the resort to explore the beach. Where a red rope was used to separate the African from the whites. It is a creepy thing to see. The social contract that the Africans have with the space the vacationers inhabit was unnerving. How anyone could feel comfortable with that is beyond me.

Once Teresa crossed the red rope she was engulfed by the true nature of the economic state of Kenya. She was bombarded by African men attempting to sell trinkets. The entire episode was almost too much for her to bear. There was a naive aspect to her that seemed shocking. The fact she didn’t know and was mentally prepared for the poverty in Kenya was shocking. And where ever there are high levels of poverty there will be crime, prostitution, and fraud. It may have been a world she was unfamiliar with. However, it was the world she chose to vacation in.

She is introduced to Munga. He becomes her protector, friend, and lover. She arrogantly believes she is teaching him about love and displaying those affections. However, she learns he is creating the illusion she believes she is craving for money. It had always been about money for him. White women come to Kenya. They get dug out for money. These African men know the game. Create to illusion. Use words like “love”and “schatz”. Give dick, stay in poverty but exist by giving these women who are never taking you away for money. Not that they want to leave. But it is all illusionary. It is all transactional. The men are not lying. They clearly understand the game as so do the women. All except Teresa. Which I question. I think her issue is not that the illusion plays out exactly as she demands.

The illusion of race respect is always broke when the white women are together speaking germen to each other. It makes their choice to be there even more disgusting. Their conversations are hard to hear and see. The joyful glee they have is so disgusting. Yet, the film is so mesmerizing. Like a car crash, you keep staring at it. That is this film. Just sadness.

I ended the film not quite understand what Teresa wanted. Well, African dick, but not real love because it was clear she didn’t care for Africans. I think that is the beauty if this film. It feels real. People are messed up and need money. I found the topic of using women as the consumer of prostitutes different and interesting. It did an excellent job in also showing that people who trick for money are just people. Check out this film if you are interested in seeing an adult story that is not Hollywood star-driven.

In closing, I do want to mention that Ulrich Seidl is an amazing storyteller and director. The Paradise Trilogy is incredible. I am going to watch a ton of his other films in 2020. I hope to write about them for you if I enjoy them.