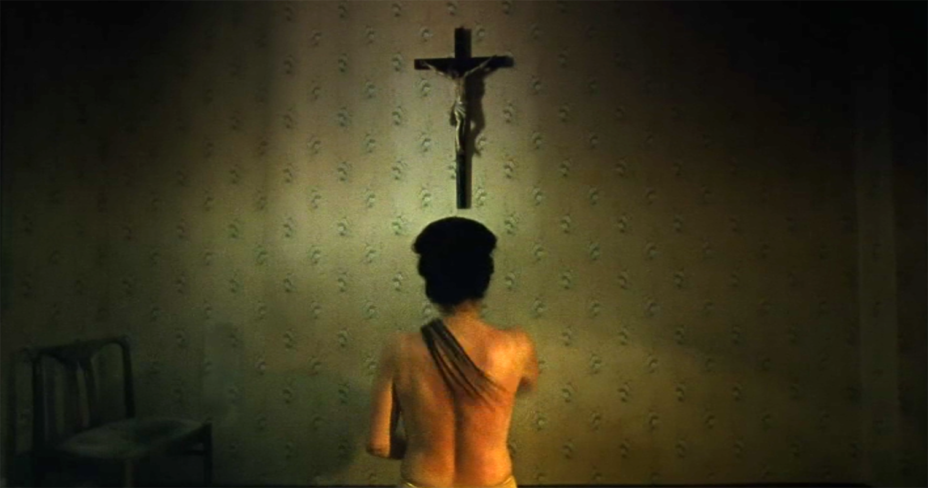 I can imagine having Faith is a lot easier when you have a support system that doesn’t challenge your beliefs. Well, this film shows that without it. That road you decide to walk alone is extremely difficult. That is what I gathered from the amazing filmmaker Ulrich Seidl dares to address this topic with his second Paradise film in the trilogy. This story follows Anna Maria as she struggles to maintain her faith and return of her husband, Nabil. Who not only is bothered by her devotion to her faith. It is also a practitioner of a different religion.

His return is complicated by his paralysis and complete sense of abandonment. Which is not in his head. She has abandoned him physically, sexually, and emotionally. Her entire being and energy is focused on being there for her Lord, Jesus Christ. Her faith and obvious sexual confusion and frustration rears its head in one of the most bizarre love triangles that I have ever seen in cinema.

Nabil and his wife Anna Maria are not in a good place with their relationship. We are never told what transpired but the relationship feels so real. There is some trauma. We are never told caused the rift between the two individuals. However, it is clear that Anna Maria’s devotion isn’t helping. Nor it Nabil’s ability or lack of ability to funnel his frustration in a manner that doesn’t end up with his physically and verbally abusing Anna Maria.

There is a moment that Nabil just breaks from frustration from all the events transpiring. It is tough to watch. Because he is correct about everything. And his attachment to what he wants is clearly not available to him. Anna Maria makes that clear. But it isn’t enough for her being honest about that to him. Because her mere presence is a reminder of what life used to be like for Nabil. And of course, there is the underlining racial component to their issues. Which if you notice it is there. Just hidden. But Nabil sees it. However, it is what it is for him.

The story is sad. It feels extremely voyeuristic when you watch it. You will feel for one of the characters. You will pick a side. That is the purpose of the film. I believe Ulrich went back to his documentary-style to create this very interesting film. Check out the second film of the Paradise Trilogy. I think this film is worth your time.