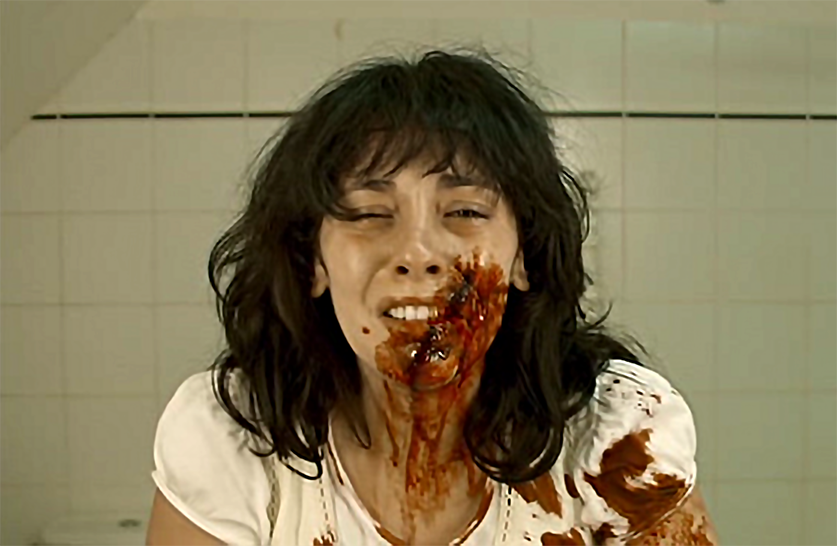 2007 was a great year for me. This was the year I saw a movie called l’intérieur also know as Inside. Well to say this movie was good is just a slight that deserves nothing less than a smack across the face. This movie had some of the very best moments ever in french horror. It is such a classic movie that it helped define an era. The era of New French Extremity. These were films that pushed the boundaries of what the main character should go through. Films like Man Bites Dog, I Stand Alone, Them, Martyrs and other films of this ilk are synonymous with this genre. Of course, a person can argue whether or not this is actually a real genre. Because all you really have to do is make a french speaking film that is edgy and it is New French Extremity. So so what, lol. Inside drew people to French films. So it is worth being recognized for just that.

This film is a simple story about a pregnant woman named Sarah who gets into a car accident that kills her husband and meets up with a woman. A woman that wants to kill her and take her baby. Pretty simple. What helps this film be so freaking incredible is how violent it is. The antagonist is La Femme aka The Woman played by the incredible Beatrice Dalle. She is probably the perfect actor to play this role. This is her best role in my opinion since her role as Core in Trouble Every Day. Just as she was in that Claire Denis film, she is in this Julien Maury and Alexandre Bustillo directed film. She took this role and played it better than I could have ever imagined it being played.

Alysson Paradis did a great job as Sarah in this film. She had as much of a grueling role that I can actually place near what the fil Martyrs Mojana Alaoui’s Anna went through. I can tell you how much she did a great job as being the pursued victim in this film. She proved herself to be one of the best final girls in the horror genre during the first decade of 2000. Look if you have not seen this film then go find it tonight. And please stay away from the remake. Stay away from any remake of a French horror film. Trust me.