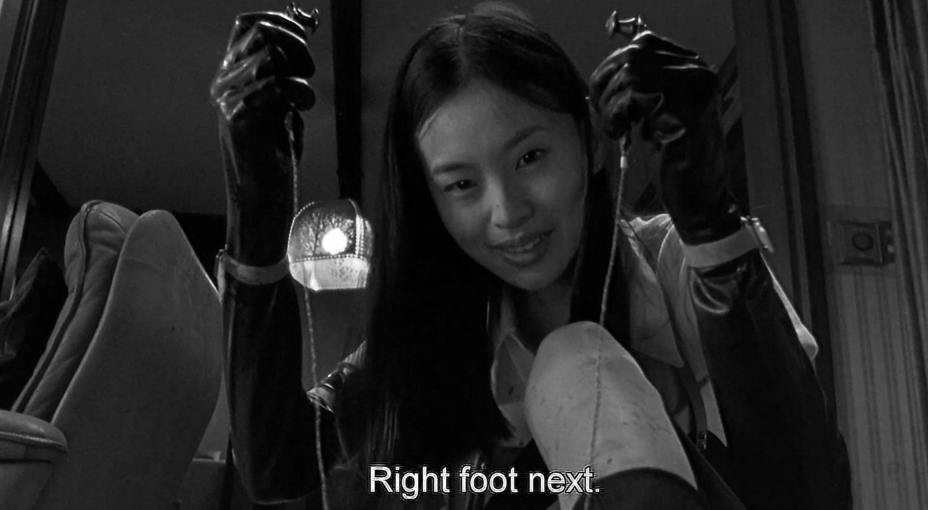 If you are reading this discussion then you know what Takashi Miike’s film Audition is all about. A lonely widower seeks to find a new romantic interest at the urging of his son and best friend. The best friend and the widower concoct a plan to hold an audition for a fake film with the hopes of discovering a new romantic lead for the widower. However, the two friends are not the only person with secrets and deception in their minds. So is a woman named Asami.

What happens next is one of the greatest horror films ever made. And in my opinion the great Japanese horror movie of all time. I do understand that the statement I just made is not universally accepted. However, the praise I am bestowing is warranted. The film has its faults. But it is a masterpiece nevertheless. This movie is, in my opinion, deserves a criterion treatment. When this film was released it quickly Takashi on my radar as a visionary in the horror genre. He brought a monster and her actions to life in a manner that I had not expected at all. Granted, I have an affinity for films that feature human monsters. However, Asami is easily one of the best female antagonist in the horror genre. Her beauty was the ultimate web to trap in her prey.

Let’s talk about a few things. That ending. It was a payoff that was executed perfectly. I look at this movie as I do “The Shining.” Both films are about the slow burn. Both do an excellent job with pacing. Neither film has you sitting there wishing it would end. You kind of sit there and follow the story with a great amount of tension as the ending comes nearer. The difference is that the ending in Audition rewards the viewers more than they actually bargained for. The torture was unexpected and quite brutal. The acupuncture needles were so messed up. “Deeper, deeper” she verbally and physically tormented Aoyama with those needles. I think the use of the needless may have been symbolic of the violations she may have suffered in the past. No ways of knowing for sure. But it is a plausible theory.

As for the wire. Well, that was just mean as fuck. She without a doubt was sadistic as hell and had some serious abandonment issues. Cutting of feet so that you can’t be left is the ultimate act of a person with abandonment issues. I mean the closest act that invokes kind of control is when Annie used a sledgehammer to break Paul’s ankles in Stephen King’s Misery. There was no doubt Asami’s intentions were to make sure Aoyama never left her. Extreme as hell. But that is The Audition and Takashi Miike for you.

Aoyama’s fate was extremely cruel. Asami wasn’t just content with murdering her victims as much as she was about making her mark on them physically and emotionally. Her approach was to seduce, and then kidnap, mutilate and kill the victim. So much of her displayed reasoning was the abuse she mentioned. However, it could have all been a ruse to gain sympathy. She was an unreliable narrator. The only thing you could gather from her that was true was that her entire conversation with Aoyama was preplanned. As you gathered from her regurgitated her conversation with him as she died. So it is difficult for me to view her as a victim or an avenging angel as other people seem to.

I don’t believe Aoyama deserved his fate. His crimes were not as horrendous as the violent acts inflicted on him. As a person he was flawed. He could have been honest with Asami in their numerous conversations. He could have even refused to take part in the fake movie auditions. I mean that is catfishing to another level. Nobody would appreciate that level of deceit. He could be handled things so much better than he did. However, Aoyama chose not to do so in the end. However, if you view Aoyama ask the metaphorical representation of men that think solely with their dick. You might argue that that metaphorical representation of the worst side of men deserves punishment. It is hard to know what Asami was thinking. What we do know is she was extremely sadistic had no issues with her actions. She rationalized the violent acts she inflicted on her male victims.

Her demise was not expected. I wonder what was in the perfume bottle. It didn’t have much effect on Aoyama’s son. It is difficult to know if Aoyama was actually saved by his son. A life living with the torture he endured and the crippling nature of his injuries would have a tremendous impact on his life. Compared to the short time Asami would have kept him alive doesn’t necessarily seem like he is actually better off.

In closing, I just want to reiterate how much I love this film The fact the film never had a sequel or prequel created makes it so much more enjoyable as a singular work of art. It allows the impact of the film to marinate in the minds of the viewer without having accompany films mudding up what you witnessed. Hopefully, a Criterion treatment one day gets made. The film definitely deserves it At least there is a collector’s edition of the movie in Blu Ray format. 90 minutes of new interviews with cast and a new audio commentary with Takashi Miike makes it a must-buy for horror genre fans. Don’t forget to check out the novel written by Ryu Murakami titled Audition if you are a reader.